10th January 2012 – Day 45: Unfortunately Dennis has been medically evacuated from the South Pole Expedition due to acute respiratory problems related to the altitude.

Dennis completed 7 weeks and 525 miles of the Journey – three quarters of the distance. We are all very proud of him. The flight that picked up him and another Expedition Member continued on 200 miles to the South Pole. Once there he was included in a complete tour of the Scott Amundsen Base.

SO HE DID MAKE IT TO THE SOUTH POLE!!!
After the visit to the South Pole he was flown 700 miles back to the Union Glacier base camp on the coast. Dennis has been in touch by telephone and has been encouraged following a complete check up at the medical centre there. The report confirms that the doctors recommended his evacuation due to severe respiratory problems and that altitude was a major factor in his ill health and that continuing for so many weeks through the problem was a tribute to his endurance and strength of mind and purpose.

It will take at least a week for his return to the UK at which point we will fully update this report.
We know he will be delighted that so many people have been following his Expedition through the web site. He has also managed to raise good income for his chosen three charities and we know that he would want to take this opportunity to thank everyone for their enthusiasm, support, concern and contributions.

January 8th was a difficult day for the team. After a frustrating struggle with a respiratory/altitude problem Dennis was evacuated to Union Glacier basecamp, and Oskar accompanied him. There are many emotions that go along with an evacuation including disappointment, sadness and frustration. But it’s important to keep things in perspective and the health and safety of each team member is, of course, the greatest priority. Even though Dennis and Oskar are no longer skiing with BB, Bob & Lisa, there is no doubt that after 45 days together they are still very much a team.

The plane that picked up Dennis and Oskar was on its way to the South Pole and they were able to join the group for the visit at the Pole. Upon return to Union Glacier, which is much lower in elevation than the recent position of the team, Dennis started to feel better. He is in the good hands of the basecamp doctor and he will be able to get some long overdue and much deserved rest.

After Dennis and Oskar were picked up BB, Bob and Lisa packed up and continued on their way. It was late in their day but they skied a few hours making almost 10 kilometers.

Bob phoned in an update today, about yesterday. He shares his feelings about Dennis’ and Oskar’s departure and what he will miss the most as he continues skiing without them alongside.

Today the team traveled the short distance to their final resupply at S 87.23.825, W 83.28.792. There they came across the black flag that marks the depot and the remaining food for the expedition including a celebratory dinner, which Oskar and BB cooked up for all.

Lisa and Oskar would like to share that their mother’s birthday is January 8. They send their best wishes and lots of love from Antarctica. They took a couple of photos as a present 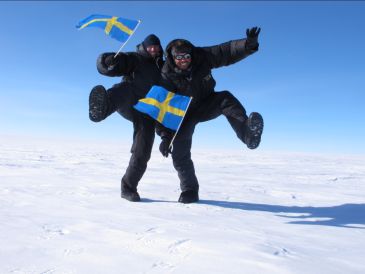 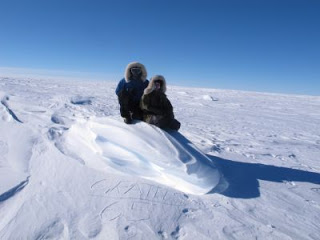 And the photo below of the team was taken a couple nights ago, when they still had warmer weather and could eat outside. This photo was simply titled “Dinner”. 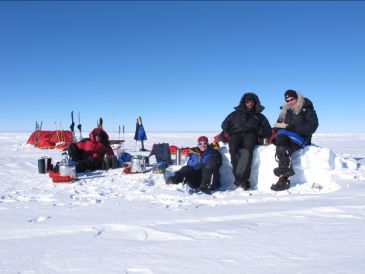 A good looking team. They appear so warm and relaxed!
Listen to Dennis’ audio update and check back again tomorrow for another update.

Today the team reports colder weather (finally!) and uphill travel. The temperature was around -20 C without wind and -30 C with wind. Now that”s more like it! We were beginning to think that they weren”t actually in Antarctica! In addition to some uphill skiing the team encountered more sastrugi. They were expecting this, but it doesn”t make it any more fun. Luckily their sleds are light because they are nearing the end of their third ration. In a couple days they will be resupplying with their final rations of the expedition. 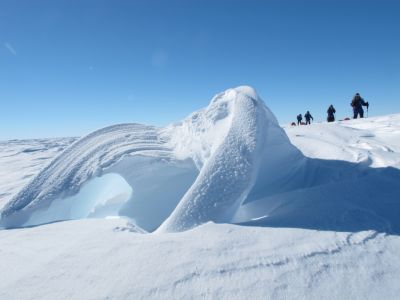 Today the team reports colder weather (finally!) and uphill travel. The temperature was around -20 C without wind and -30 C with wind. Now that”s more like it! We were beginning to think that they weren”t actually in Antarctica! In addition to some uphill skiing the team encountered more sastrugi. They were expecting this, but it doesn”t make it any more fun. Luckily their sleds are light because they are nearing the end of their third ration. In a couple days they will be resupplying with their final rations of the expedition.

Sastrugi. Imagine running into this in a white-out!
BB gives a wonderful audio report about their day as well as some introductory thoughts on the last If you live any distance away from the training area for the subject you are covering, then you will spend a lot of your precious lesson simply getting there – and though a good driver ed online instructor will make sure that it is constructive, your actual “new learning” may well be only 30 minutes (half) of your paid lesson. weeks of the expedition. They still have many miles to go, but the light is at the end of the tunnel. With almost three degrees left to ski it is a small light, but with each step it gets a little brighter.

They climbed to approximately 6900 feet; they have a little under 2500 feet left to ascend. The South Pole lies at 9300 feet but due to the atmospheric conditions the physiological effect of the altitude is closer to 12,000 feet.

With the increase in altitude the team can expect a small but steady decrease in temperature. In general the temperature decreases approximately 3.5 degrees C with every 1000 feet gained in elevation in a dry climate (it’s less for a a climate with more moisture).

Today the team reports nice weather and 15 kilometers of progress. They slept in to get a little extra rest and were off in the afternoon. Their current location is S 86.45.336, W 86.4.226.

Dennis, in his audio update, gives us a lesson in latitude and longitude. He reminds us that each degree of latitude is 60 nautical miles, or 69 statute miles, or 111 kilometers. When they phone in their report every day the most important item we listen for is their latitude. We can tell a lot about their day depending on what number we hear. The lines of longitude, which converge at the South Pole, provide far less information, if any at all. When very close to the South Pole they will be able to cross all the lines of longitude in a few steps. Of course the two coordinates combined give us their position. 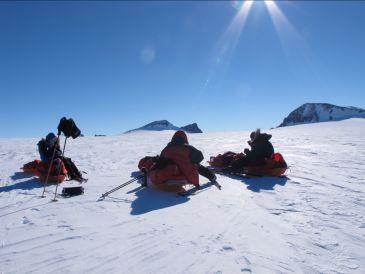 All that matters to our team is that they keep taking steps forward, one at a time, and whenever those steps add up to a degree there is reason to celebrate!

Make sure to listen to Dennis’ audio update and check back again tomorrow for another update from the team!