Today the team reports beautiful traveling conditions and smooth going. At one
point they thought they saw mountains, but it turned out to be clouds. They are
on the lookout for mountains, at least the tops of mountains (called nunataks),
as they head toward their second resupply in the Thiel Mountains.

They
made 25 kilometers in 10 hours of travel. We will be reporting their coordinates
soon hopefully. We know that some of you are keeping track of their progress
with maps! In the meantime, here’s a picture we received of the team at the
first resupply. 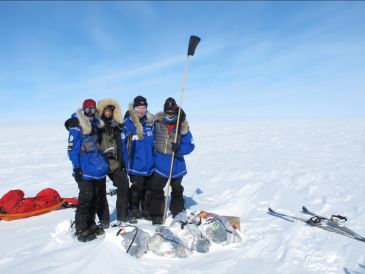 The team at resupply
#1

Make sure to listen to Bryony’s audio report. We
especially liked the part about how light her sled felt before she realized the
second one wasn’t attached

Check back in again tomorrow for another update
from the team!