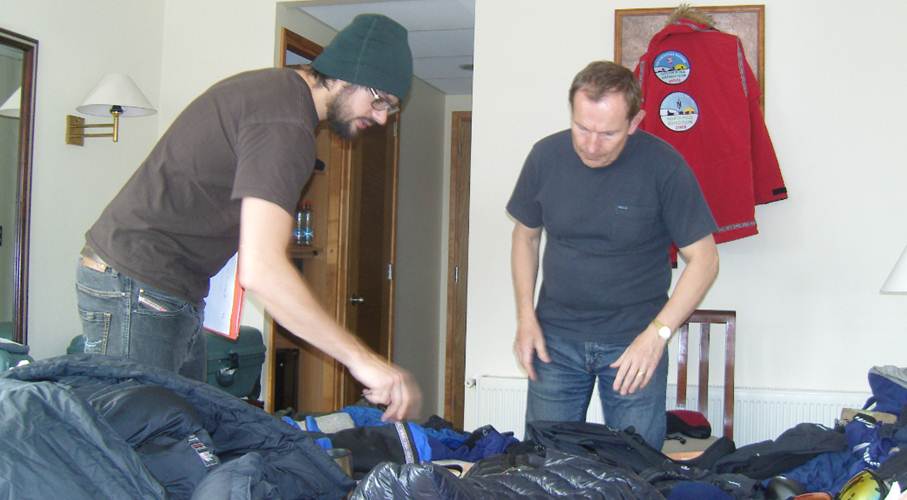 Having all met up for drinks and dinner on Nov 18th the team met for breakfast on Nov19th and were immediately getting down to business. Our first news was the weather conditions in Antarctica have been the worst ever for the start of the summer season and so flights were running over 12 days late and the teams already down there were only making slow progress. This potentially means if the weather doesn’t get better soon our flight out of Punta Arenas could be delayed. The good news was the forecast is looking better over the next few days and so ALE who operate the air bridge will keep on flying swapping aircrew to catch up over the next 3 – 4 days. With only 1 scheduled flight per week catching up the timetable should not be a problem once the weather gets better and the crews fly the extra missions to get us to the continent.

After breakfast we all returned to our rooms and laid out our kit. Oscar and Lisa came around to inspect what we intended to take and made a few suggestions on improving some of our insulation. We then packed our bags and moved the kit to a local warehouse where we started to sort our food and kit into piles. The main bulk will be loaded onto our sledges and the remainder split into 3 resupply bags that we will pick up as we get closer to the Pole.

We set up our pulks (sledges) and much to my surprise we are each going to pull 2 pulks each. This will spread the weight between the two, stopping the pulk sinking into soft snow so much but will of course increase the surface area on the snow to pull. I guess it is going to be trial and error how we load the pulks and distribute the weight. I am sure we will have that worked out in the first few days.

While all this was going on Sue had joined us in the warehouse and was busy sewing on my sponsor’s badges to each of my jackets and fleeces. The Yomp badges look great and Ronnie had also given Bryony and me Union Jack badges which Sue also sewed onto my jacket under my name reminding us we are in fact aiming to reach the South Pole on or around January 17th to celebrate the 100th anniversary of Scott reaching the Pole on that day in 1912.

After a long and dusty day in the warehouse it was back to the hotel for a much needed shower and then we all went out for dinner. Sue and I had found a small and friendly restaurant near our hotel a few days before and recommended it to the team for Saturday night’s dinner. It was also Lisa’s birthday so we organised a cake for her and had a very enjoyable celebration. The team all seem to have got over their jet lag and we are getting to know each other so the jokes and leg pulling has already started making the evening a fun event and one I am sure Lisa enjoyed as part of her birthday celebrations.

Today being a Sunday many of the shops were closed but we were able to travel out to a large duty free area with many shops and a large supermarket. The team were able to load up with additional warm clothing and some additional snacks. Oscar was in charge of buying the final rations for the journey including basics such as toilet paper. It was a worry when he returned with nothing but Lisa soon took her little brother under her wing and back they went to get the shopping he had originally been sent for. It reminds you how unreliable little brothers can be even when they get older.

We returned to our warehouse with all the additional last minute items to pack in the bags and Pulks now being weighed for the final time and got ready for transporting to the aircraft for our flight to Antarctica on Tuesday assuming everything goes to plan. We are now almost ready and the worst part of the journey is about to start which is the waiting and anticipation of getting started. I am now looking forward to getting on the aircraft and flying to Antarctica to start our adventure.

Tonight will be another chance for the team to get together and enjoy dinner. It will also be my last chance to say my goodbyes to Sue as she is starting her journey back to the UK in the morning. It has been great having her with me on this part of our journey and joining the team in its final preparations. I know the hardest part of this trip will be not seeing or being with Sue for two months which will be the longest we have ever been apart over the last 32 years. I am already looking forward to returning home to her in January 2012. Although we will be thousands of miles apart I know she will be close to me every step of the way and scolding me for my bad jokes and non PC comments.